Menu
Log in
Register
Install the app
You are using an out of date browser. It may not display this or other websites correctly.
You should upgrade or use an alternative browser.

Finally got around to capturing a video, here it is:

Some obvious bugs in this video:
Slow and steady progress..

Christmas means lots of free time, so here's what I'm up to:
That's a lot of fixes.. here are some videos. First, I wired Weasel up to the first computer for testing:

And then, here's me just playing through the game - since it mostly works now just with janky bits here and there:

Staff member
It's looking so, so good. Amazing work.

Nice work Stauff! I noticed the splash damage too. I know it's not consistent with the vanilla game, but probably more realistic. I kinda like it actually.

I remember z-ordering being a pain during the development of Exult. They had to hard code a number of exceptions for certain map areas. I don't if Exult ultimately managed to fix everything with an algorithm or whether the Pentagram team also faced the same kind of exception issue thing.

Anyway, many thanks for the Christmas present! 🎁
N

I wrote a data file explorer for crusader about 15 years ago. let me know if u need help with something. I enjoy a bit of reversing from time to time.
R

Registered on the forum to track this project, playing these games again has been on my bucket list for literal decades now. With actual scrolling it looks smoother than ever. I'm not sure I could help with anything (my skills are more in the direction of pixel art) but I wish to offer my sincere gratitude for undertaking this and I do hope so, so very much that you manage to see this project through to completion. Will be following progress!

Thanks for the note @rotterdxm!

Since I haven't updated for a while, lest you think I've stopped working, here's what I've been up to in the last 2 months when I have a free moment. It's kind of all over the place, but the whole point of the project is I do whatever I feel like:
Not bad when I add it all up - the first level is getting close to completable! Unfortunately despite fixing a bunch of things, adding new features has left the movement a bit more broken than my last video so I'm in the middle of hammering out problems there - will post a new video once I've worked that out a bit.
Last edited: Feb 24, 2021
R

I'm so glad that you're enjoying cracking this complex puzzle that you've set for yourself, Stauff! Congratulations on your impressive progress, looking forward to the next video

I take it that the amount of tasks you can switch between at will starts to decrease as the project progresses, with the tougher/less enjoyable ones remaining. Let's hope that there are no big showstoppers hiding there!

Personally speaking, when working on videogame related projects I also like to switch things up so I don't get burned out on it; I completely see where you are coming from.

I've worked out some of the issues I mentioned in the last video, and still a few left.. but too long since I've posted a video!

Only a few points, but they make all the difference. First, here's the movie decoding and a little bit of gameplay for No Regret:


Still a few broken things - gun overlays don't work, one enemy doesn't die (also he's supposed to roll back and forth, that's not implemented), a box explodes but it's still there.

But I haven't spent as much time on that as No Remorse. Now here's me just playing No Remorse for 18 minutes with all those fixes above - until just after meeting the informant. It's so close to being right now that you can basically just play it:


Listen to that music looping in the right place! Watch the combat rolls work perfectly! See how my shots hit the right target!

There are still a few problems that stick out to me:

* Explosions have the wrong z-order, so they sometimes appear below other things. Probably should be always-on-top.
* I got "stuck" a couple of times in the video and used the cheat mover.
* Running from gun drawn gets into a weird loop, mover transitions are not quite all right.
* Enemy AI is still kinda broken. The first guy just stands there, which is clearly wrong.
* When I turn off the steam valve, you see a couple of frames of the "full" steam at the end - so there's still something wrong there.

But all that said.. I just had a couple of weeks away from it and played it fresh last night .. and it was actually fun!


A side note on the Xan movie codec (by Blue Mu Productions??). ffmpeg and programs that use it (like VLC) have a partial implementation of this codec. With a lot of help from their code, I think I've made the first "full" reimplementation that is pixel-correct to the original - ffmpeg doesn't get all the luma right. You can also use it to play Wing Commander 4 videos, if you like some middle-aged Mark Hamill. This is from replacing the Origin video with a WC4 movie: 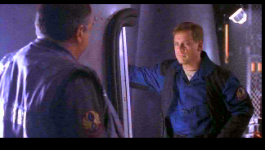 Staff member
Exciting news regarding the Xan codec. I've shared it with my friends at the WCCIC.

That's ridiculously exciting news! Great work Stauff! Please let me know if you need someone to help with testing at any time!

Question, while I still have both the original CDs lying around, I have no optical drive and no guarantee the CDs still function. Of course, these installations will then also need a veritable array of patches as well. So I guess Origin/GoG will be needed?

rotterdxm said:
That's ridiculously exciting news! Great work Stauff! Please let me know if you need someone to help with testing at any time!

Question, while I still have both the original CDs lying around, I have no optical drive and no guarantee the CDs still function. Of course, these installations will then also need a veritable array of patches as well. So I guess Origin/GoG will be needed?
Click to expand...

Great question! I've been testing with the GOG versions as I no longer had my original CDs anyway. I think that's the easiest place to get the data these days. Depending when you got the CD the data may be identical anyway - as far as I know the GOG version is just the most recent released version. Also, most of the patch changes are in the exe I think, so I'm not sure how different the pre-patched game data will be either way. I'm happy to get new detection entries though, as the ideal will be that all the versions just work.

Another quick update since I made some good progress in the last couple of weeks:

* Switched NPC pathfinding to a reimplementation of the Crusader style (previously used more complex U8 style). Now attack process behavior is much closer to original - although not perfect, seems to still need some tweaks
* Fixed run-with-gun-drawn restarting sometimes
* Make sprites always-on-top so explosions and the crosshair don't disappear
* Fixed gravity process to have a small hang time like original
* Fixed collision for certain dynamic objects (eg, broken guns no longer fall through the floor)
* Fixed bug which caused overlapping pickup notifications when there were many of them
* Fixed not being able to select "bomb" style items in inventory (made mission 1 not possible to complete)
* Fixed inventory using wrong shape sometimes
* Fixed crusader stance not updating after weapon switch small/large
* Fixed palette fade-in effect at start of game on health/energy bars

The most visible remaining bugs for me now are:
* Actors don't always die properly
* I still sometimes get a bit stuck
* Falling into the acid doesn't trigger the correct animation
* Saved games always load with the "menu" music (that's what was playing when they got saved..)
* A few small missing features (difficulty selector, 'grab' operation (g button), jump with tab key, subtitles in movies, etc).
* One big missing feature - switch to robot (control via computer)
* A few game engine intrinsic functions that I haven't needed yet (map jump, isFalling(), etc)

And honestly that's about it! Remorse is getting surprisingly close to "done".
Last edited: Mar 28, 2021

I started feeling like I'm close to finished, so I got excited and did a bunch of new work:
That's nearly half my TODOs from the last update.. plus some other things. Need to capture a video to show it all off - fire some big guns, take control of a robot, then fall in the acid

Remaining things I need to feel finished**, most of which I've mentioned before:
** Finished for me is not *exactly* reproducing original. For example, the informant video needs a greyscale background, and I haven't done any work on joystick or mouse support.. but that's not so interesting - mouse is really the worst way to control the original

Haha, if viewing a middle-aged Mark Hamill is the price for pixel perfect vids, I'll take that any day! 🎥🎬

I haven't actually done any of the things on my todo list above, but I've made a lot of small fixes. Here are the major changes since my last message:
And some videos. First, big guns, big explosions!

Then, using the robot:

And finally, the end of Mission 1 (complete with an annoying leftover bug that means the barrier doesn't clear correctly after planting the bomb)

Made some progress over the last few days. Here's the latest change list:
The result is that it's now possible to finish Mission 1, visit the rebel base, and advance to Mission 2 without needing any cheat moves. It's still possible to encounter some noticeable bugs along the way, but not so many any more!

TODO list of small things is still kinda long, but really starting to feel close now. Here's the list of key things I'll need to fix before general testing:
.. and any other bugs I discover along the way I guess!

Had a few days free, so making some good progress - and unusually, attacking my TODO list head-on. Here's where I'm at:
And, a video showing off these and also the faster elevators, hidden ammo display for energy weapons, etc from the last update..
(if you want the "guy running around on fire", it's near the end)