Below you will find the soundtracks for the Crusader games. Composed mostly by Andrew Sega and Dan Gardopee, the music is a melding of electronic, techno, and rock.

At a time when video game music was mostly done through MIDI and FM synthesis, the Crusader soundtracks were a breath of fresh air for those outside the realm of the Commodore Amiga. Crusader utilized the the modular tracker format, which was a bridge between MIDI and CD audio.

The MP3 (320 CBR), OGG (q6.0), and FLAC (-8) music files have all been appropriately tagged with metadata and have a short fade-out effect. They also come with high resolution album art compiled from actual Crusader art assets. The Asylum Music Format (AMF) files are a direct rip from the game discs and have not been altered. You can play these files with a tracker program like OpenMPT or a media player like foobar2000.

Not included in these packages are the pieces of music composed for the game cutscenes. These are actively being pursued for digital archiving. 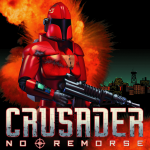 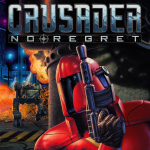 There have been other musical creations by Crusader fans as well as those on the original development team. You will find these below.

Crusader “The Traveler” remix (2006) (4MB, MP3, mirror) — From 2005-2007, a Crusader game was in development for the PSP by Outsider Development. This is the theme song as remixed by the song’s original composer, Andrew Sega.